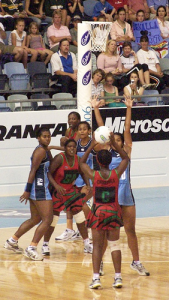 A sport like netball requires you to get along well with the rest of your teammates. A successful netball team isn’t about one or two star players. It doesn’t matter how good your best players are, if you don’t work well as a team, then you won’t win games. It is as simple as that.

A very average team can be improved a lot through the use of some simple team building activities. They encourage players to work together and get to know each other, leading to improved performance and a great team! In the words of some great inspirational people:

“Unity is strength… when there is teamwork and collaboration, wonderful things can be achieved.” – Mattie Stepanek

Almost every important sporting coach or historical figure knew the importance of teamwork. Working as a team can lead to seemingly impossible goals being accomplished – such as winning the grand final of your netball league, even though you have no star players!

What is Team Building?

Team building refers to activities which are designed to enhance the ability of people to perform their role within a team. They are designed to improve the social and interpersonal relations between team members, allowing the team to reach new heights in performance.

Sometimes team building is designed to address problems within the group, such as two players who don’t work well together or who often disagree with each other. However, it can also be used to improve the overall efficiency of the team instead of focusing on specific aspects.  A definition of team building can include the following aspects:

Why is Team Building Important?

There are a number of reasons why team building is important in a sporting sense. Probably the greatest of these is so that your team improves enough to win games or reach team-oriented goals. Team building activities help develop a healthy culture in and around your sporting club. They help people remain motivated to train and perform at their highest level, while also making the club a fun and desirable place to spend time. It is intuitive that the more time members of your team spend together, the better they will play together on the court.

Some Benefits of Team Building:

Although team building has too many benefits to list, some of the most important and influential ones include:

You will be able to communicate and work better together – The main reason why coaches choose to use team-building activities is so that the team learns to work better together. Communication is vital when it comes to the netball court to ensure that passes hit their targets and that the game plays out the way that you want it to.

They can be fun and can improve the team spirit – Although some teams, particularly those made up of younger players, will view team building activities as boring and pointless before you begin, they will more than likely enjoy themselves before the end. When the team members are enjoying their time together, they will want to play for each other and win together, motivating them.

Competition between players – Although this isn’t the point of team building exercises, it is often a beneficial side-effect. If players are competing within the team, they will probably strive to improve and enjoy their time together. It is important that this competition doesn’t become to strong, or players may begin to play for themselves rather than for the team.

Teammate interviews – Dedicating a training session to letting team members get to know each other better can have incredible results. One of the best ways to do this is do paired teammate interviews. This lets every player on the team learn more about every other player, which will make them more connected and understanding of each other. This means that they will be able to understand their teammates better and therefore will play better when it comes to gameday.

Don’t let the players choose who they pair up with – make the pairings yourself, in a way which will allow the people who need to get to know each other develop relationships. Each person should get a pen and a paper with five or six questions to ask. They need to quiz each other, and then share their funniest answer with the group at the end. If you have time then each player could interview multiple others, increasing the amount of team-building which occurs.

The disappearing chairs activity – This is a quick, fun activity which will teach team members to trust each other. They will have a lot of fun at the same time! You need four armless chairs set up touching each other, but all facing in opposite directions.

Four players sit sideways on the four chairs, facing in four different directions.  They all need to lay back on the laps of their teammates, after which you need to remove the chars one by one. The four players will find that they are supporting each other – which is what they need to do during games and training sessions. Talk about the activity afterwards to make sure everyone gets the most out of it. A video example can be found here. 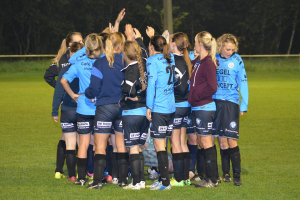